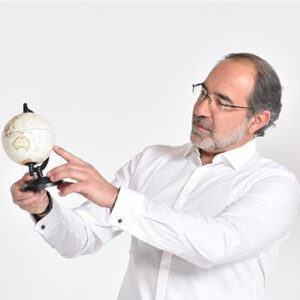 Patrick, being 55 and having 2 kids, he is one of the managers of the Yorizons Team.

He started to race/sail in the 80’s with Yves Pajot or Yann Elies, being often on podiums in Tour de France à la voile or EDHEC races.

With a master’s degree in international business and marketing, he wandered around the world for industrial and IT companies.  Developing or taking over companies, dealing joint ventures with middle east governments or restructuring sales and marketing teams in multinationals.

In 2008, he settled down in Antibes by taking over Dolphin Wear, thus discovering yachting and uniforms. From 9 people based in Antibes at the start up to 40 people equally spread over the Palma and Barcelona sites, the company grew until 2019 with the help of David and Lucy Ireland from Deckers who joined the adventure in 2017.

Patrick was also the founding president of ASAP, the association which will advise the city of Antibes on its port strategy and supported the changes that occurred in the VAUBAN port in 2017.

In 2020, Patrick left Dolphin wear & Deckers and began thinking with his large network of contacts and partners about the new requirements of Yachting.

It is the start of a new human and industrial adventure with even more demands on the quality of the products and services provided.

He started to race/sail with Yves Pajot or Yann Elies.

he settled down in Antibes by taking over Dolphin Wear, thus discovering yachting and uniforms.